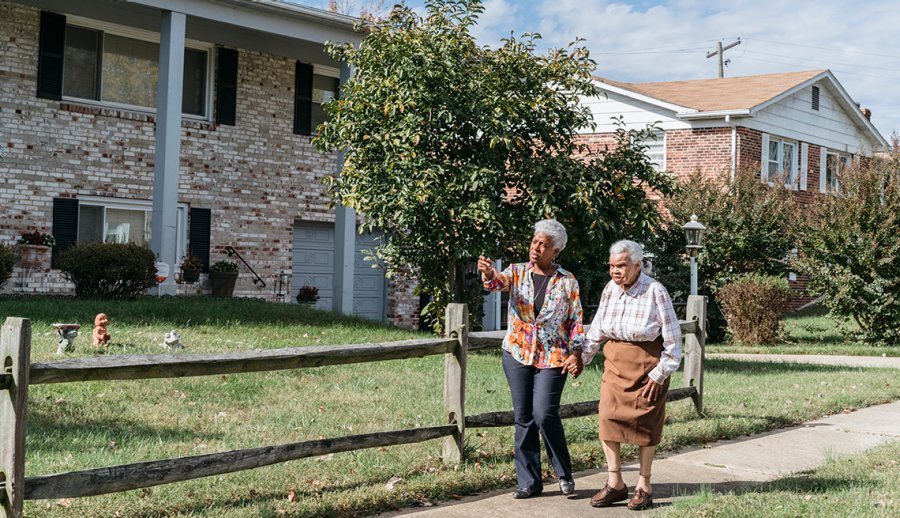 For Loretta Woodward Veney, it’s important that she keeps her mother, Doris, active and on the move.

Loretta Woodward Veney, 58, of Clinton, Md., is a caregiver for her mother, Doris Woodward, 88. Her mother was diagnosed with dementia in 2006 and lives in a group home 10 minutes away from Loretta’s house; she goes to see her mother almost every day. Loretta is a contractor for the Department of Homeland Security and a motivational speaker for caregivers.

There’s not one thing wrong with my mother but the dementia. She’s totally healthy; she doesn’t even have arthritis. She doesn’t know who I am, but she knows that she knows me from somewhere. She always tells me I’m a very nice person and she’s happy to see me. I bought her a stuffed dog, and she thinks it’s real. She’ll hold him and say, ‘He’s not going to pee on me, is he?’ And I’ll say, ‘No. I just took him out.’

Because she’s so healthy aside from the dementia, I’m not going to let her sit there and waste away. I do whatever I can to keep her busy and engaged. I’ll pick her up in the car and take her on walks and hikes. Before my husband passed away in 2016, we started an Easter egg hunt at our house, and let me tell you — my mother can really move, especially when she realizes there’s candy in the eggs!

“I’m not going to let her sit there and waste away.”— Loretta Woodward Veney

Every day is different, but we always find something that will appeal to her. We do activities like coloring, puzzles, listening to music or building with Lego. When I get the Lego out, her eyes get big, and she goes crazy. She doesn’t like the big ones that are for toddlers; she likes the little ones, and she’ll just slap them together. It holds her attention for a long time. I like seeing her doing stuff, using her hands and her mind. I take lots of pictures because she doesn’t remember what we did. We enjoy looking at them together.

My mom was a single mother. When we were little, she took my sister and me to the Smithsonian museums, dance performances at the Kennedy Center, Chinese New Year and other cultural events in D.C. every weekend. She exposed us to everything. I appreciated it then; now I’m giving back to her.

The main thing is, I can’t stand that blank stare — it unnerves me — so I try to do whatever I can to keep her as active and involved as possible. Seeing her laugh and smile and enjoying herself — that’s all that really matters. It makes me feel close to her again. I would do anything for that smile.

— As told to Stacey Colino